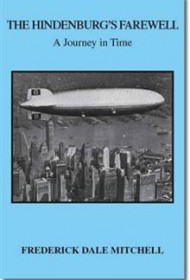 Frederick Dale Mitchell immediately draws you in to his science fiction account of The Hindenburg’s Farewell: A Journey in Time.

With crisp, vivid descriptions, he sets his story in Arizona, where Mitchell casts himself as the lead character. Mitchell soon encounters Bob, a rugged cowboy in a Tortilla Flats saloon. The mysterious Bob beckons Mitchell to his table and offers him the chance of a lifetime — a trip back in time to an event of his choosing.

Out of all the events in history, Mitchell gives no explanation as to why he chooses to be aboard the Hindenberg’s maiden voyage in 1937. He also fails to give a clue as to how Bob could make this happen. Instead, Mitchell simply meets Bob at a designated place in the wee morning hours and incongruously boards what’s called the Train to Perpetuity, a ride that only Mitchell can see. It whisks him to 1937 Germany where he’s disguised as a reporter for the Chicago Tribune and tours LZ129 — the German Zeppelin’s assigned number.

The author gives impeccable details of what it was like to be aboard the Hindenburg — down to the seven-by-six-foot size of Mitchell’s room, the names of fine wines served and the menu on the voyage’s first night. He draws such facts from the bibliography of books he cites at the end of his story.

While the book has flaws – MItchell fails to fully develop Bob’s character, for example – he effectively builds his story to May 7, 1937 when the Hindenburg explodes on landing at Lakehurst, N.J. Unfortunately, he devotes a scant five pages to the actual explosion and subsequent rescue of some of the passengers. He goes on to write about the aftermath of his time-travel experience in tedious detail and his visit to the site of the disaster on its 60th anniversary. Despite the less-than-suspenseful ending, readers will appreciate this book for its historical accuracy and visit to another era.