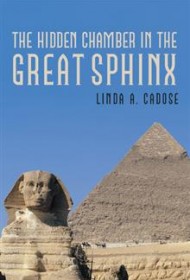 For centuries, many have conjectured that hidden chambers lie beneath the Sphinx and under the sands surrounding the Great Pyramid. In the first young adult novel of a series starring archeologist Cliff Post, Linda Cadose sends her hero to Egypt on an expedition to discover what rests under the right front paw of the mysterious statue.

The tale starts with Post moving into new digs closer to the Boston university where he teaches. Just as he begins forming a relationship with a beautiful neighbor, he is asked to make the trek to Egypt. Post invites the woman and her disabled son to come along.

Once he begins to explore the subterranean vaults and tunnels, the archeologist finds scrolls written in binary code that tell of a much more advanced ancient society than previously imagined. He also discovers, among other finds, 13 crystal skulls that can be configured to create a super-computer.

News of these amazing discoveries spreads rapidly in the media, and the super-computer whets the appetite of terrorists hoping to use the device to destroy the U.S. economy. When the group kidnaps the professor, he proves to be no Indiana Jones clone, as it doesn’t take much threatening to convince him to help them drop the DOW by 1000 points.

The Hidden Chamber shows real promise, but the novel suffers from the author’s attempts to do too much in a very short book. In less than 80 pages of text (the rest are chapter title and blank pages), Cadose tries to develop a scientific discovery, a terrorist plot, a romance, a look at bullying, a medical breakthrough, several subplots and more. As a result, none are fleshed out enough to make the story work well.

Now that Post has found romance, Cadose should be able to concentrate on the action and make the sequel, The Underwater Pyramid in the Bermuda Triangle, the riveting thriller she aimed for in her debut.