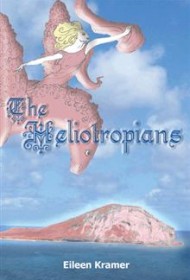 Eileen Kramer’s The Heliotropians is a bizarre science-fantasy, time-traveling epic that begins in the far future, when Earth is covered in ice and only one place, Heliotrope, is fit for human habitation. There, the remnants of humanity live out their long, peaceful lives, though the tranquility of Heliotrope does not appeal to everyone. Eight restless teenagers — Marius, Jason, Eva, Undi, Isis, Osiris, Pavarti, and Tiger Hound — decide to time-travel to the distant past to learn about Old Earth.

But time travel is not as simple as this band expects. They arrive far in the past and must live through the course of human history (their long lifespans are not explained except for some lengthy naps). Some, like Isis and Osiris, become gods to ancient civilizations. Undi, more or less the main character, lives without memory in the sea for most of her life. Jason, the narrator, loses his body and can only observe his friends’ lives as a ghost.

The Heliotropians has its charms and its problems. The story is unusual enough to be compelling but is bogged down by long stretches of wearying description. The characters are sympathetic, but their reactions to their fortunes and misfortunes often are peculiar. For example, Isis and Osiris, separated early in their new lives, spend millennia searching for one another. The strain drives Isis to cocaine addiction and Osiris to political extremism. But when they unexpectedly end up at the same cocktail party, they stare at one another and leave separately without saying hello. No reason is given for their hesitation to reconnect.

The book takes odd, repeated jabs at overweight people and does not try to account for the ethics of teenagers pretending to be deities. The editing is uneven. Still, it is a decent if dizzying read, and the illustrations are excellent.