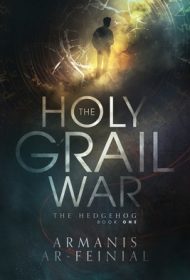 The first installment in Armanis Ar-feinial’s Holy Grail War saga is an ambitious—albeit convoluted—amalgam of science fiction, military thriller, and Arthurian legend that follows a mysterious black ops soldier’s painful journey of recovery after the government that (seemingly) created him and employed him attempts to kill him and his entire elite task force.

In the prologue, Ghost and the rest of Task Force Seven are in the Nevada desert near Area 51 on what was supposed to be a training exercise. The set-up is a trap, however, and Ghost’s entire crew—including his love interest—are mercilessly killed. Ghost barely escapes with his life, but the overwhelming guilt of being a seemingly disposable assassin for the American government and having a hand in killing more than 200,000 people over the years send him into spiraling trauma.

Reemerging years later in Boston, posing as a stockbroker from Ohio named Ted, Ghost meets a group of young Christian professionals who attempt to bring him into their friend group. Although some of the group are overbearing and annoying, they succeed in taking down some of Ghost’s walls—initiating personal growth.

Ghost’s personal journey of healing and his attempt to integrate into society is intriguing, but the book suffers from the awkward way in which the author introduces numerous plot elements (genetically modified soldiers, King Arthur fusing the Holy Grail with Pandora’s Box, the Caster Administration, the origin of the monstrous threckets, etc.). So many plot threads are largely unexplained or unexplored that they are simply left dangling at novel’s end. And while these threads may be explained and explored in the next book, the lack of narrative clarity in this episode makes it a confusing, aimless read with an unsatisfying conclusion.

This is an everything-but-the-kitchen-sink storyline with far too many ideas thrown into the mix. In the end, the tale falters under the weight of its multitude of elements and themes.