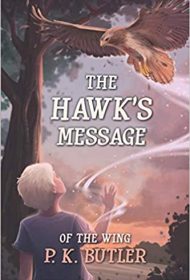 In the second offering of P.K. Butler’s Of the Wing trilogy, 11-year-old Claire, who has a mystical connection with birds, goes on a trip with a billionaire ornithologist to find a rarely-seen species.

Whenever Claire wears a T-shirt with a picture of a bird, that bird will come to her. She has a special relationship with a hawk named Ku-Khain who once helped saved her when she was young, and Claire has intervened three times to save the bird.

Claire meets Jerry, an old man who secretly reveals that he’s an “Earth wizard” and that Ku-Khain will become her mentor. Then it happens: One day a goddess-like woman reveals herself to Claire as “the deepest part of the hawk, a part that shares consciousness with all beings” and explains that “billions of birds have vanished from the Earth” and it’s up to Claire to save them.

Meanwhile, news is that celebrity Robert Crawley is returning to his chateau near Claire’s house and plans to fly to Arkansas, where the remaining habitat of the nearly-extinct ivory-billed woodpeckers is located. Claire persuades Crawley of her ability to find birds, and so he takes her, her friend Victor, and Victor’s father. Although their canoe trip through the wildlife refuge proves successful, Butler throws a surprising curveball.

This story’s narrative isn’t as streamlined as the first. There are superfluous side plots. For example, an old friend of Jerry’s is suspected of breaking into Crawley’s house but is quickly absolved. And as Crawley reveals he once trained Ku-Khain in falconry, Claire frequently frets that he plans to capture her again, yet this storyline, too, fizzles out.

Still, Butler again excels with her solid characters and strong powers of description, creating a palpable sense of place: “They floated on the misty, quiet waters through a corridor of cypress and tupelo whose bloated bases looked like gargantuan toads.”

Despite some glitches, readers will surely follow Butler to watch her hone her skills.