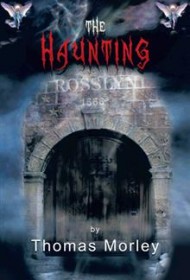 With The Haunting, author Thomas Morley may have invented a brand-new genre: gothic horror meets erotica by way of several encyclopedic references to Romany history and esoteric thought, with a few parables added in for good measure. It’s very confusing, but never dull.

The novel opens with a ghost story. A young man named Tony is called by demons to various rooms in his house, only to find that his family members have been violently killed. He wakes up to learn that he’d been dreaming, but the story foreshadows a later visit from the forces of evil.

We learn a bit more about Tony’s family, and the book takes several side trips into what read like encyclopedia entries on the history of the Wirral Peninsula and Wallasey, England, where the family home is located, along with discussions of several chapels whose geographic placement has something to do with the location of the chakras in the human body. It’s unclear whether his parents’ long-standing interest in such things is to blame for the later appearance by demons, but not to worry; Tony is a martial artist, ready to give the Devil a fight.

The Haunting is highly unusual, and its daring structure sometimes leads to unintentional humor. After the Devil has sexually assaulted Tony’s mother and set the family estate on fire, his father makes a rather calm phone call, given the situation: “Please come quickly, we’re being attacked by the forces of evil, we need the police, the fire brigade and the paramedics.” Stiff upper lip, indeed. Harder to follow are the little bits of plot that are tacked onto the lengthy descriptive passages. If they’re all building to one central conclusion, it’s hard to find the connections along the way.

The beginning and end of The Haunting pack some big scares, but the middle of the book is largely confounding.