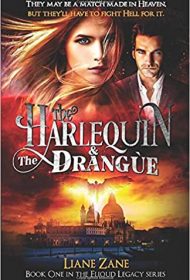 Olivia Markham is a CIA operative stationed in Vienna who also moonlights as a virtually unstoppable bō-wielding vigilante who wears a harlequin hood. When a mysterious man helps her defeat a group of zombie-like attackers, Markham is drawn into a shadow world where the supernatural inhabitants are locked in an “age-old spiritual war” and where many are descendants of the biblical Nephilim.

The handsome mystery hero turns out to be Mihail Kastrioti, a seemingly ageless man with supernatural powers. He’s a drangùe — a “dragon man”—the offspring of a dragon and a woman. Together, the duo joins forces against Asmodeus, a sexual predator who turns out to be much more than a simple villain.

While this is a well-written novel with an impressively intricate plot and equally impressive backstory, it’s likely to disappoint readers’ expectations. All indications—the premise, title, even the cover art and tagline—point to this being a romantic thriller with supernatural elements. While Zane delivers the supernatural goods, the novel isn’t written like a thriller: The pacing is much too slow, the action sporadic, the chapters long, and there’s no climactic pay-off at novel’s end.

The biggest disappointment, however, is with the romance. The author takes more than 250 pages to begin seriously delving into the dynamism between Markham and Kastrioti—which is red hot—and after including some masterfully written tease sequences (without actual sex), the romance culminates in an unsatisfying ending.

The novel excels in so many areas—well-developed characters, rich description, and more—but by trying to be too many things (a supernatural romance exploring biblical myth, an espionage thriller, etc.), this storyline falls short. Still, it features two memorable characters. Here’s hoping Book Two ratchets ups the tension, the sense of immediacy, and the supernatural romance.