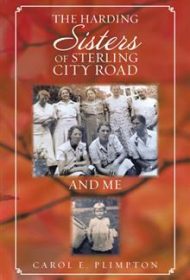 Carol E. Plimpton, grand-niece of the women, does an admirable job piecing together snapshot biographies of their lives, relying on family lore, government records, scrapbooks, obituaries and newspaper snippets. The most charming device is her use of items from the local weekly called HOT NEWS which reflect the parochialism of the era. (“Donald Reynolds left Wednesday with Jack Spiers to take his boat to Virginia. Mrs. Reynolds is sleeping at Grace Hendry’s.”)

Plimpton also throws in dashes of storytelling that hint at her writing talents, including a funny scene where, during an ongoing feud between sisters, one sister ducks down in the car seat so her siblings won’t know she’s fraternizing with the enemy sister. But those moments are too few. More often, the women’s lives are sketched with commonplace detail: “I remember that Grace and Al had a little black pug puppy. It was so cute and lots of fun to play with.”

This is a disappointment, as there’s no lack of intrigue in the glancing mentions of suicide, money squabbling, and even rumors of an out-of-wedlock baby who may have mysteriously died. Apparently, Plimpton was unable to dive too deeply. “I wish I had a way to know more about them,” she writes of her subjects in the epilogue, “but I believe I have captured their character in the pages of this book.”

With a more complete narrative delving into these darker matters, the book could attract a wide audience; after all, there’s a rich literary tradition of peeling back the idyllic facade of small town life where family secrets fester and close ties can bind too tightly. As is, however, the book’s most appreciative audience will likely be the author’s family and friends.