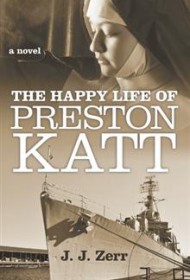 This poignant, evocatively written tale is the story of Seaman Preston Katt, a man who enlists in the Navy in 1941 to escape the abusive life of an outcast.  From the first few pages, the book displays vivid descriptions and dialogue that engages — all the way through to the story’s shocking conclusion.

In this relatively short volume, author J.J. Zerr weaves a haunting tale of the day-to-day experiences the young swabby undergoes as he takes part in some of the major naval battles of World War II, including Pearl Harbor, Guadalcanal and the Battle of the Coral Sea. These fictionalized, real-life events are skillfully and realistically portrayed.

Although he distinguishes himself as an extraordinary lookout who saves more than one ship, Preston Katt’s self-esteem never seems to fully recover from his childhood in Saint Ambrose, Missouri, where, as the illegitimate son of an alcoholic mother, “his life had no more direction than a mongrel dog skulking around town searching for dinner.” He attributes his redemption to Sister Ralph, a grade school nun who helped him turn his life around.  But he remains haunted by guilt and sees “God’s punishment” for his sins in every bad thing that happens, including occasionally failing to spot Japanese aircraft and submarines.

Riveting combat descriptions from an individual sailor’s point of view are seamlessly woven through the novel as Katt confronts Japanese bombs, torpedoes, the death of friends, and his own overly scrupulous conscience. The conclusion comes as a surprise, but readers will understand its inevitability from clues the author has left along the way.

No spoilers here, you’ll have to read this story to find out what becomes of Seaman Katt. The Happy Life of Preston Katt is heartily recommended.