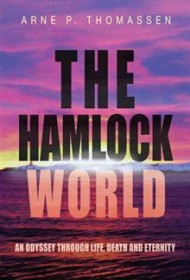 Arne P. Thomassen’s near-future speculative novel The Hamlock World opens with a section entitled “Caution,” wherein Thomassen warns the reader to watch for “hideous organizations” that use brainwashing tactics. Next, in the Preface, Thomassen tells of his personal relationship with many parts of his book: he believes he has observed real UFOs, that there are “strange energies in the air” over the Bermuda Triangle, and that his relationship with Christ has given him prophetic visions. Additionally, he notes that his sister-in-law was a victim of a brainwashing cult, and he helped deprogram her.

This Preface, though nonfiction, is synecdochic for The Hamlock World, down to the novel’s voice. Thomassen is so convinced he is right about these “facts”—villainous societies; prayer yielding personal, specific, conversational answers from the Holy Spirit; UFOs; clairvoyance; “energies,” etc., — that his protagonist, Roger Hamlock, seems simply a stand-in for himself. Hamlock looks like Thomassen (who is pictured on the book cover), and believes all the same things. The only immediate difference is that Hamlock lives in the year 2020, though even that difference eventually disappears when all the attempts to discredit the leader of the main cult in the novel come to naught, so Hamlock’s spirit travels back in time to 2012 to tell himself to write The Hamlock World.

Unlike L. Ron Hubbard, another author who, like Thomasson, incorporated his personal philosophy into a didactic work of fiction, there is no story to carry the unconvinced reader through The Hamlock World. Clunky lines like “We are a multibillion dollars corporation with our own intelligence branch, so you will not be able to run away or feel safe anywhere,” are representative of the prose. This artlessness, when paired with Thomasson’s desire to convince his reader of his views, makes for a novel that will only appeal to people who already agree with the author on the nature of Christian faith and cosmic “truth.”