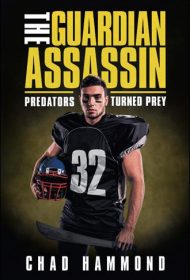 High school is a teenage wasteland at the best of times, let alone when a regular Midwestern kid finds himself possessed by a murderous preternatural being. This is the conceit of Chad Hammond’ slim novel with an underlying horror bent, The Guardian Assassin.

The story is set in rural Illinois circa 1989, where high school junior Chase Bradshaw has it all: a hot girlfriend, a cherry spot as a running back on the Shelbyville Warriors football team, and a happy home life. But things change when he knocks back a few brews and goes diving at the local swimming hole with friends, accidentally encountering a mysterious glowing orb. For Chase, this sparks freakishly realistic nightmares in which he kills rapists, pedophiles, and other unambiguously evil villains.

The avenger pulling the strings is Killian, a figure out of Greek lore. Killian was son of Ares, god of war, and nephew of Morpheus, god of dreams. More importantly to the plot, Killian can telepathically plant visions of killings into Chase’s mind. Chase soon discovers that his nightmares are quite real.

The book’s primary flaws are its overly simplistic characterizations and well-worn plot. This begins a trilogy, according to the book’s final words, but there’s little substance to propel further stories: Despite his demonic alter ego and growing bloodlust, Chase is white-bread bland, as is his predictably pretty, loyal-to-a-fault girlfriend. We learn little about Killian, beyond a cursory overview of the fictional figure’s place in Greek mythology. The ill-fated victims don’t generate much drama either, as they’re all cardboard predators straight out of movies like Death Wish.

Maybe there are just too many clichés in this equation: High school jock, plus hot girlfriend, plus paranormal serial killer equals a story that most readers have seen too many times. The result is a novel that’s likely to disappoint.