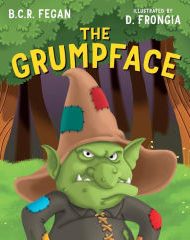 The Grumpface is a story of love, determination, and redemption, but presents these big concepts in a relatable, even funny, way.

Dan is a young inventor who falls in love with a flower seller in his village. When she’s unable to find roses to sell one year, he embarks on a journey to find one for her. Along the way, he’s captured by Grumpface, a man whose profound grumpiness caused a wizard to curse him long ago, transforming him into a small, ogre-like creature. Grumpface challenges Dan to three tasks, telling him that if he’s able to complete just one, he’ll let him return to his village.

Dan uses his inventions to try capturing a magnificent bird, crossing a bridge over a volcano, and finding a silver statue in a cave. Each time, something goes awry and he fails. Each time, Grumpface becomes slightly more amused by the young man’s antics. When Dan loses the statue and instead emerges from the dark to proudly present a shoe, Grumpface finds the mistake so ridiculous that he starts to laugh, breaking his curse and returning to his original form. The old man releases Dan and tells him how to find the rose he seeks. Dan returns to his love with the rose and a story so delightful the two live “ungrumpily ever after.”

Told in rhyming verse, The Grumpface delivers a fun, fanciful tale. Classic fairytale underpinnings belie a story with modern flare, where the hero is an inventor rather than a knight and accomplishes his goal while being relatable, kind, and sometimes inept. The illustrations are engaging and colorful, nicely complementing the story. Although a few words like “whimpered” and “displeased” may be difficult for early readers, the vocabulary is mostly accessible.

Overall, readers young and old will appreciate this tale of a bumbling but valiant hero who puts his own spin on a classic quest. The Grumpface is an entertaining book worthy of multiple readings.