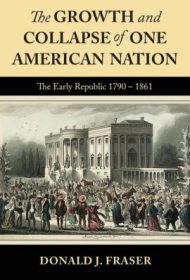 This book subscribes to the storytelling tradition of historical analysis and continues chronologically from the author’s first book (The Emergence of One American Nation, 2016). While the previous book outlined what makes one an American (i.e., those that share the uniquely American ideal), this explores who can be an American (relating to ethnicity, religious belief, and gender). The period covered is 1790 to 1861, from the formation of political parties to the eve of the Civil War.

The story told here is that America was never homogeneous, and minority groups fought hard to win the right to be counted as fully American. The narrative starts with the establishment of the two-party system – putting in practice the ideals and compromises of the founders—and then focuses on two main areas the founding generation didn’t adequately address: slavery and federalism. While the founding documents emphasized equality, the Fugitive Slave Act (1793) and Alien and Sedition Act (1798) made it harder for minorities to become American citizens. Some states abolished slavery, but others (especially Southern ones) firmly held onto the practice. Thus, the narrative details the country’s slow march to war. In 1861, when the first cannon was fired on Fort Sumter, America, as envisioned by its founders, collapsed.

The author also seems to have made a genuine effort to avoid personal bias, as evidenced by the extensive referencing of primary and secondary sources. The book would have benefitted, however, from a timeline of events and eras either at the end of each chapter, or as an appendix.

This work’s strength lies in exploring broader political themes that we continue to face, such as what defines an American (or makes one un-American). Readers can reference not only our founding documents, but also learn how previous generations of Americans addressed the same issues, in the hopes that we can learn from our past.

In short, The Growth and Collapse of One American Nation is highly recommended for those interested in American political history.