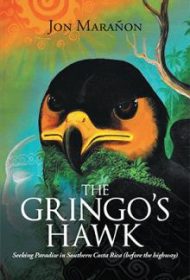 The Gringo’s Hawk chronicles Jon Marañon’s search for a place in the world, played out in the 1970s, ‘80s and ‘90s on southern Costa Rica’s Pacific coast. Now in his late 60s, the author reflects on the fruits of that personal exploration, made possible by family money.

Marañon, a pen name, paints himself as a solitary, aimless surfer and diver who came to Costa Rica as a college sophomore for a term abroad. When given the chance to buy 400 acres near the town of Morita, he jumped at the promise of a new, unscripted life in the tropics.

Using copious notes from the time, Marañon recounts violent highs and lows as the young, blond Anglo tests his mettle in a remote, mostly indigenous culture. He weighs epic failures against solutions that often require moral compromises. His cattle herd flourishes with gentle, humane treatment, for example, but is brutally slaughtered at market by buyers wielding sledgehammers.

Eventually, Marañon grows his property to 4,000 acres. He builds an adventure-tourist lodge, starts a family, and advocates for the rights of those less fortunate. As squatters, poachers, corporations and corrupt politicians threaten the country’s pristine environment, he successfully lobbies to protect natural wonders.

In his introduction, the author explains that names and dates aren’t a priority, which may bother readers trying to follow the chronology or find locations on maps. Morita is now named Uvita, for example; other place names may also be changed. But nothing interferes with Marañon’s conclusions about the experience. All his grandiose youthful dreams didn’t come true, nor was he able to save the culture of his tropical paradise, but it’s OK. He did his part, all one man can really hope for.