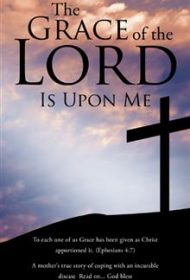 Ten years after her husband died, Sithabile Dzingayi was diagnosed with HIV. In The Grace of the Lord is Upon Me, she shares how God sustained her through illness and unfounded accusations from the medical community. She writes, “I did not have any affair after my husband’s death…but the “Consultant believed I was sleeping around and infecting people.”

Dzingayi relies heavily on Scripture for her book’s narrative. She relates her shock upon diagnosis, includes a log of her medications, compares God’s provision for her to that of a widow in the Bible, and concludes with her faith for healing someday.  “You may be in a dark world,” she writes, “but I am thankful to God that I can reveal his compassion in the same situation like myself.”

While heartfelt, her story’s presentation poses several challenges for readers. The book has titled sections, but no contents page. One section, “Demon Torments” seems unrelated to the HIV focus.

Additionally, timelines are confusing. Dzingayi leaves Zimbabwe to visit her sister in London “for a holiday,” one year after her husband dies. She mentions finding jobs in London and later enrolling in a three-year training in the health sector. The text then jumps to the diagnosis of HIV, with no transition to indicate the multiple-year gap; readers will be unsure of both the timelines and settings.

Typos and incorrect words (i.e. “consents” for “concerns” and “shelf” for “shelve”) weaken the book, as do missing words (“The tests picked up various infections and [sic] was placed on medication”). Meanwhile, Scripture appears written from memory, frequently resulting in inaccuracies in punctuation or wording. (Errors in the 23rd Psalm include the words “rode” for “rod,” “stuff” for “staff,” and more.) And the double-spaced text is often bolded, for no discernible reason.

Dzingayi’s intent is admirable, and readers not bothered by the issues noted may find her story and faith touching. The audience, however, will likely be limited to family members and friends.