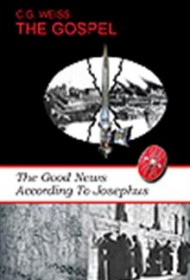 C.G. Weiss clearly did his homework in penning The Gospel. This impressive historical novel set during the peak of the Roman Empire offers a stunning degree of detail — all fueling a narrative that tracks the complicated relationship between the Roman Empire and the Jews in the ancient world. The result is a treat for any casual or serious student of the history of Western civilization.

Set in the Roman Empire in 95 C.E., the story centers on a dinner party at the home of Flavia Sabena, a fictionalized cousin of the Roman Emperor Domitian. The imagined soiree on the final night of the Roman Festival of Saturnalia features some notable guests, including the Roman historians Suetonius and Tacitus. But the most compelling is Josephus, the former Jewish militant who took up arms against the Roman Empire in the first Roman-Jewish Wars. Captured by Romans, Josephus went on to win the favor of the military general Vespasian, who would become emperor.

Josephus’ journey from armed enemy of the Empire to Roman citizen is an important centerpiece of the story. During the course of the evening, Josephus offers dinner guests details about the motives behind the Jewish rebellions. What emerges is a portrait of a polytheistic Empire at odds with a monotheistic movement that’s only gaining power.

Weiss writes with the care and craft of a dedicated historian, offering appendices and notes. But his text also features some unorthodox style choices. He switches to italics and different font sizes for flashbacks and other scenes. The table of contents features an extended summary of the entire book. A battle recounted in first-person comes side-by-side with a third-person description of the dinner. Such moments can be confusing.

Nonetheless, the author successfully balances the thick historical context with a light narrative touch. While the book may prove unwieldy for readers unfamiliar with the history of the ancient Western world, anyone with an interest and even casual background in the topic will find this an impressive treat.