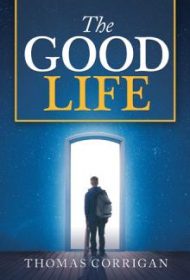 Thomas Corrigan’s young adult title, The Good Life, is the coming-of-age story of a teenager coping with bullying and violence.

Walker Morrison is a 15-year old freshman. He’s a football player and talented pianist attending a private school and living in a wealthy area in Silicon Valley. But when the novel opens, he lies injured and bleeding, attended to by a priest in a church. After this prologue, the novel proceeds to describe the events that brought him there, returning to the priest only at story’s end.

Walker is a complex character. In his own words, he’s a “cynical, sarcastic, self-righteous, rich asshole.” As he relates the story of his first year of high school, a picture emerges of a troubled teen trying to make good choices in a world of drugs, gun violence, petty blackmail and bullying. But when Walker’s decisions cause the death of his close friend’s father, he finds himself locked in a life-threatening battle with another boy, Tommy Barnes.

The story is rich in action; Corrigan’s fight scenes are dynamic and fast-paced. Walker hones his fighting skills at a boxing gym and is tutored by Jane, a likeable mixed-martial arts teacher, one of the few adults Walker can connect with. Told in first person, the novel benefits from Walker’s strong narrative voice that effectively showcases teenage angst, self-doubt and unhappiness.

The Good Life is less successful in its minor characters and dialogue. Walker and Jane are the only fleshed-out, believable characters. Others— Walker’s parents, his enemy Tommy, his friend Josh—lack emotional depth; this often makes their actions and words difficult to believe. The storyline is far-fetched and punctuated by violent action that seems to have little or no consequences for the perpetrators.

Corrigan is himself a high school senior, which lends authenticity to Walker’s character. Despite the story’s flaws, readers will want to see how events turn out for Walker in the novel’s dramatic final scenes.