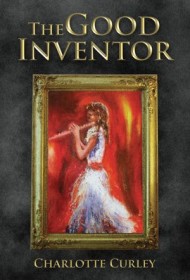 The Good Inventor is a young adult novel that follows the story of Charlie French, a boy who recently lost both of his parents. He’s traveling from New York to Ireland to meet his uncle, an eccentric inventor who has agreed to take in Charlie. Charlie has trouble adjusting to his new life – he is an immediate target for the school bullies and he’s afraid he might get taken away from his uncle by the Department of Children and Youth Affairs. But what Charlie doesn’t know is that he has a magical destiny, and his life is about to change.

Charlotte Curley’s debut novel is a fantastical read. At the beginning, it appears to be the story of a boy coping with his parents’ death and learning about a brand new life. But as the novel progresses, the story expands to include the issues with bullying, antics with Charlie’s uncle’s inventions, and a magical evil creature that Charlie must find a way to defeat. Charlie is an engaging character, and it’s wonderful to get to know him better as the novel unfolds and to watch him embark on various adventures.

Unfortunately, the book jumps storylines quite quickly and a bit too often; it may have worked better had the author chosen to excise a few subplots and instead focus on the main storylines. While Charlie’s battle with evil seems to be the central point of the novel, it’s often sidelined by other plots and isn’t well-fleshed-out as a result.

Curley writes both dialogue and narration well, and as a result, children will sympathize with Charlie’s lonely existence. While adults might have issues with the many plot diversions, young readers are more likely to overlook them and enjoy Charlie’s adventures from beginning to end.