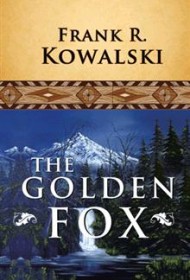 John Stafford, the Golden Fox of Frank Kowalski’s novel, lives during the storied, blood-soaked conquest of the American West. Stafford’s own life is every bit as eventful as the age, which is perhaps why it takes Kowalski nearly 700 pages to recount his many adventures.

Stafford is a wealthy, educated Philadelphian, expected to become a lawyer like his father. But he’s drawn instead to the West. The book opens on the banks of the roiling Yellowstone River, where Stafford retrieves a canoe carrying a beautiful, insensate Indian woman — Little Dove. He is smitten and marries her.

Soon afterward, Stafford undertakes a mission from President Lincoln to police the Plains in a way that rigorously respects the rights of Indians — provided, of course, that they comply with Washington’s wishes.

The next few years involve riverboat trips and buffalo hunts, outright scoundrels and the merely incompetent, successful military ventures and ill-advised maneuvers ending in massacre. There’s plenty of romance, too, with an uncommon number of blissful marriages occurring among Stafford’s team members – none of them happier than that of Stafford and Little Dove. Everyone who meets the couple marvels at Little Dove’s grace and gentility.

Kowalski makes much of the fact that Little Dove is from a tribe that supposedly intermarried with ancient European explorers; hence, she’s fairer than most Indians. A boarding school education has given her perfect English and polished manners. At one point, Stafford says approvingly, “You ought to be a white woman, Little Dove.”

That sort of thing — along with a few too many stereotypical references to dusky maidens and lusty bronzed braves — makes for some squirmy reading. In addition, a lengthy subplot slows an already meandering tale. Kowalski could easily have used it as another book. Still, Stafford’s experiences make for a sprawling, enjoyable read about a bittersweet time. As the book ends, you can almost see the fences that will soon section the vast prairies into tamed farmland.