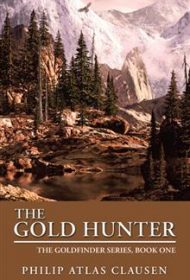 This story, the first in a projected series of four novels collectively called The Goldfinder, is a well-crafted excursion into the world of magical realism.  A surreal dreamscape that moves back and forth through time, identities and presumptions, the book is set in the mid-19th century American West where everyone is infected, one way or another, with the often-fatal disease of gold fever.

At the story’s center is the deteriorating Valory family. John, the father, operates a saw mill, ripping logs into planks for a mining operation until consumed by one of his old demons, drink.  His Russian wife Magya, her dreams of a budding singing career crushed by John’s deceptions, finally abandons the family and flees. Their two children, the teenaged Petr (Magya claims to have left off the second “e” in his name to save ink) and Annabel, a girl who proves wise beyond her years, cling to each other for protection.

Dreaming of rescuing the family by discovering vast riches, Petr is guided by the disembodied voice of a wise Indian spirit to an underwater cave filled with gold.  But instead of providing salvation, he eventually realizes that gold is a great destroyer and that his find will bring only loss, instead of prosperity. Secretly following her brother, Annabel, too, stumbles onto a golden horde but finds danger as well. Ultimately, Petr discovers his true history— a discovery that will lead to violence and death.

The author controls all these elements admirably and stylishly, his prose striking the right notes whether describing scenes touched with Native mysticism or those of dark realism. The characters are well drawn, interacting believably while responding to their hardships in ways that are always consistent with their personalities. Cleverly, although the novel is strong enough to stand alone, sufficient questions are left open for readers to anticipate the next volume in the series.

Overall, fans of magical realism will find The Gold Hunter rich with rewards.