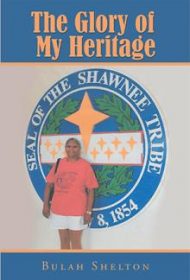 Bulah Shelton’s slim book The Glory of My Heritage offers family lore that incorporates significant American history. The author refers to her ancestors as “displaced,” as much of her heritage includes African Americans brought here as slaves, plus a mixture of Native American folk.

Shelton has pored over numerous documents—marriage and death records, census data, newspaper articles, obituaries, and Native American tribal rolls—to gather her facts. She shares stories of individual ancestors such as Henry Parks, born into slavery in Arkansas, his parents having come to the U.S. by slave ship from somewhere in West Africa. The author names several possible departure points and ports of landing in America, illustrating that separation of families was almost inevitable.

Among the family lore Shelton provides is the story of an ancestor living in substandard housing, surviving with a small garden, and another cheated out of land given to him by the U.S. Government after serving in the U.S. Army. The author was raised in Oklahoma and states that, with an African American grandmother, Native American grandfather, and friends of “all shades and colors,” she already knew “integration” before attending school.

The Glory of My Heritage offers interesting glimpses into the past. For example, the author writes: “We colored folks were not allowed to be taught to read or write. It was against the law.” However, much of the book comprises dry data. The text is dense with names and dates that impede the narrative flow, as in: “Henry was born January 18, 1862 in Van Buren, Crawford County, Arkansas to slaves George Parks and Caroline (Postum) who according to oral history were shipped on the same salve ship along with George’s sister, Liza Parks and niece, Adeline Blakeley (Liza’s daughter).” Often, it reads more as lists than powerful storytelling.

As such, the book will interest mainly the author’s family and friends, although researchers of the subject might find its references a useful starting place.