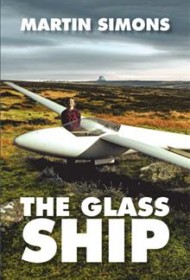 In this novel, a staid English schoolteacher happens upon a new pastime that transforms his life and leads to a new love.

The Glass Ship begins with a prologue setting up a bit of mystery to be resolved later, then reverts to the past when Peter Markham is suffering through an unpleasant Easter vacation and the loss of his girlfriend. As he is about to drive home from a week of glider flying lessons that didn’t go very well, he is confronted by a panicked teenaged girl nicknamed Mitch who demands he help her load a trailer so she can drive it to pick up her sister Julia and their glider.

Despite the unpleasant start, the two form a fast friendship, and soon Mitch and Julia encourage Peter to give gliding another shot. It would seem good times are ahead, but Peter soon learns some disturbing news about Julia, and it is clear that trouble is likely on the horizon. But even as relationships are failing, new bonds are being formed.

The Glass Ship is well written with fully dimensional characters who exhibit interesting flaws and attributes. The plot is grounded in detailed knowledge about flying gliders, which also contributes to the culture and setting. Author Martin Simons has a natural and engaging style and is skilled at the nuances in conversation, particularly between characters in a budding relationship.

There are a few minor shortfalls, including a lack of attribution during some passages of dialogue, which can be confusing. Likewise, the wealth of information about gliders may at times become tedious for those who aren’t involved in the sport.

Nonetheless, the story is likely to be enjoyed by a wide readership and particularly those with an interest in flying.