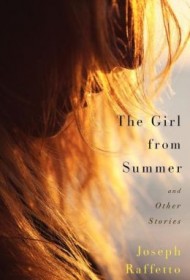 The Girl From Summer and Other Stories is an ambitious quartet of novellas, each with a distinctive plot that frequently gives a nod to literary classics.

The book opens with “Young Scott and Zelda,” a well-imagined piece in which the struggling F. Scott Fitzgerald pursues the popular and flighty Zelda without much luck. Author Joseph Raffetto does a nice job of capturing the longing that so defined Fitzgerald’s work, as well as Zelda’s manic nature. Here, they’ve narrowly avoided a head-on collision as Zelda steers a motorbike toward a tree: “Later, we lounged in a languid field below the dreamy skies of Montgomery. We shared and puffed on the same cigarette. … ‘When I’m out of the army, I’m living in Manhattan.’” Scott tells her, “‘I’m going to be a great novelist.’”

The second piece, “The Girl from Summer,” is closely linked to the first. The protagonist, Kristin, is a screenwriter who has written a screenplay about Scott and Zelda, the outline of which reads very much like the first novella. After she is brutally assaulted in Los Angeles, she returns to her hometown to heal and discovers a kindred spirit in Holden, a failed athlete.

The third, “Inside ’75,” reads like a memoir, taking its cue from the classic The Outsiders, while the final piece, “Seeds from ’79,” is the story of an underdog teen who might find happiness with a wealthy girl normally beyond his middle-class reach.

The action scenes in these stories, often with episodes of violence, have any overly familiar feel to them. (In the title story, for example, Kristin and her boyfriend, Holden, confront her attacker with a gun: “Holden shoved him onto the leather sofa … Kristin aimed the gun at his balls. ‘You should have stopped when I said no,’” she tells him.) But otherwise, each story is well written, with solid description, believable dialogue and sympathetic characters. In all, these are satisfying stories that readers who appreciate quality fiction will enjoy.