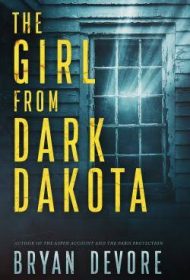 Bryan Devore’s latest novel takes its diverse cast of characters on a dark and compelling ride.

The Girl from Dark Dakota centers on the upcoming anniversary of the murder of Annabel Heller. Annabel was found dead, alongside her lover and husband in what authorities deemed a double murder-suicide, but Annabel’s ghost is crying out for justice.

Four main characters are lured into the mystery in the small town of Williston, North Dakota: Rachel Black, an orphan teenager with psychic powers who hears Annabel’s ghost screaming; Jason Hardy, a Chicago accountant who, in auditing the local hospital, experiences her ghost and other terrifying things; Dr. Donovan Graves, a professor who investigates paranormal events and is urged by his dead son to probe the mystery; and Madame Helen Bovell, a disgraced psychic who lost her powers and had been relying on human instinct to guide her readings until Annabel’s ghost reaches out to her.

The plot features more than enough heat-pounding scares: A poltergeist rips apart a hospital room; a ghost hunter almost drowns in a pond, and Rachel encounters the devil himself. Devore delivers rich description, and fans of horror fiction and paranormal thrillers will likely enjoy creepy passages such as when chickens maul ghost hunter Tommy: “At this second strike, a crescendo of low gurgling growls rose up from all the chickens. And in that moment they felt as dangerous to him as a pack of hyenas.”

There are a few quirks that some may quibble with. While the story is told mostly through the four main characters’ points of view, it occasionally veers to three more minor ghost hunters’ perspectives. With so many viewpoints, the overall story can sometimes feel muddied. Also, Devore refers to most characters by their first name, except for Dr. Graves and Madame Bovell, an affectation that proves distracting.

No matter. With twists and scares aplenty, The Girl from Dark Dakota should easily win over fans of the genre.