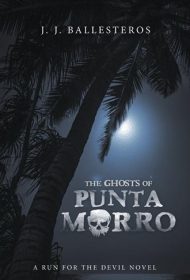 Reluctant smuggler and trouble magnet Simon Donovan returns in this action-spiked third volume that follows author J.J. Ballesteros’ Run for the Devil (2017) and The Moonlight Runner (2019).

The story begins where it ended last time, as Donovan and his motley crew flee a hellacious seagoing firefight in their schooner, the Siete Mares. In the previous novel, just before the aforementioned firefight, a cartel boss so evil he’s known as “El Demonio” had kidnapped Itzél, the married woman Donovan adores, and secreted her off to a hidden location. Now, fortunately for Donovan’s gang, they have something this demon wants: a big shipment of AK-47 machine guns the cartel needs to fight a running war with a rival cartel.

The merciless commander of this rival army is Col. Barca (also known as the “Thunderbolt”). His cartel plays a crucial role in Donovan’s plot to manipulate both sides of this bloody conflict in order to retrieve Itzél.

Much like Ballesteros’ previous books, this is fundamentally a story about showdowns and double crosses. To his credit, the author’s prose, dialogue, and characterizations are noticeably nimbler and more fine-tuned this time, although there’s still a tendency to shoehorn in extraneous characters who add little to the show. Donovan remains a troubled but intriguing hero, and Ballesteros has picked up the pace while still skillfully crafting the complex and violent web of intrigue on the Yucatan Coast.

The dizzying cast may lose some readers who find themselves struggling to keep up. But those who buy into the multifarious cast will enjoy a story that adroitly holds their attention throughout.