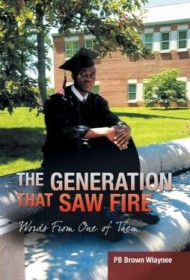 The First Liberian Civil War was an internal conflict lasting from 1989 to 1996 that severely impacted the lives of Liberia’s citizens. This book is one young man’s detailed personal account of having lived through that time as a pre-teen.

The book opens with a short explanation of how Liberia came to be when the African country’s ancestors were repatriated there from the Americas in the early 1800s. It then jumps to the mid-1980s and inside the tumultuous lives of Wlaynee’s friends and family as rebels and government forces attacked one another. The author personally witnessed and vividly recounts flying bullets and horrors such as the random execution of innocent people.

With schools closed indefinitely, Wlaynee spent his time foraging for food for his family, later beginning a small business selling cigarettes and kerosene for extra cash. All the while, he moved among the capital city of Monrovia, small towns and the jungle’s interior to survive.

The author’s well-drawn descriptions clearly show his harrowing and difficult early life, putting the reader inside the scene. Sometimes, however, the text gets bogged down with minutiae, such as needless mentions of shower taking and going to bed, as if recording a daily diary. The book also gives only cursory mention of the principals behind the war and further details that might offer clearer historical context. For example, though he mentions Charles Taylor, he doesn’t explain that he was the former government minister. Neither does he offer information on then-president Samuel Doe and what stirred up the conflict.

While the memoir gives a heady and wrenching glimpse of innocent citizens who become pawns of war, its weak structure keeps it from being a strong contender for the library’s history shelf and it predominantly will appeal to those who shared the author’s experiences.