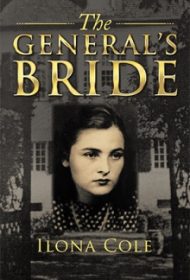 In this heartfelt fictional story based on real-life experiences, three German sisters come of age during the trying times of WWII.

The General’s Bride is a personal account written by Ilona Cole (the daughter of middle sister Lizzi) and crafted with rich memories of love and loss, happiness and devastation amidst an historic era.

Frieda, Lizzi, and Katja grew up amidst comfort and privilege. Each “felt that extra heartbeat” when they met their future husbands, and forged ahead with lives that included marriage, children, travel, and celebrations. As WWII takes center stage, husbands and sons are called to arms while their families back home face challenges and tragedies brought on by war. The younger generation is often left wondering “Do we have a future?”

The storyline follows a relatively sequential timeframe as key characters move from childhood to adulthood. Unfortunately, daydreams and recollections of past occurrences often lead to a repetition of information.

Cole’s ornate writing style brings texture to her family story. Much attention is given to the beauty of a fragrant rose garden, the elegant draping or intricate embroidery of fine attire, delicious culinary fare, or the lavish interior of stately homes. Such imagery provides an effective contrast to the likes of forced relocations and air raids where “… everyone lying on the dirt floor in the shelter on their stomachs could feel the ground swelling and rolling, a terrible feeling …”

While the story is of a personal nature, the third-person narrative allows it to read as a compact novel, rather than a journal or memoir. Its universal themes of family bonds, joys and heartaches should appeal to general readers—as well as to family members, who will clearly appreciate the book’s epilogue of what happened to various family members over the years (including death from suicide, illness, and broken hearts) and the portraits, snapshots, sketches that illustrate the book.