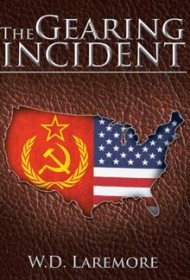 An American destroyer, the USS Gearing, disappears during the height of the Cold War and reappears in a drastically altered Reagan-era version of history in this spirited World War III scenario from New York historian W.D. Laremore.

Our narrator for this ominous time-traveling adventure is Professor Edwin Theodore Burnside, a historian famous for discovering an artifact called “The Atlantean Bust.” On the morning of October 6, 1982, Burnside is in the company of three graduate students: Bombay-born beauty Dipti Bhavra, American cowboy Bucky Mills, and Dutch exchange student Elsa Van Noort. Plunging readers right into the action, Laremore inflicts upon their world a mysterious global episode that causes everyone to black out for two hours.

They awaken into a world changed drastically from the one they knew. Through a temporal anomaly created by The Atlantean Bust, the USS Gearing is thrust forward from 1962 to 1982. Its disappearance at the height of 1962’s Cuban Missile Crisis has been the precipitating event for full-on hostilities between the United States and Russia. In this alternate future, Ronald Reagan now leads a ragtag collection of armed forces in a fight for American freedom.

In a fascinating twist, Burnside’s best friend Jessica Decker is now commander of the USS Alamo, which is poised to become a key player in the pitched naval battle off the coast of America. Along with his students and Commander Decker, Burnside must ferret out a Russian infiltrator with knowledge of The Atlantean Bust’s trans-dimensional powers and discover a way to send the Gearing home and set history right.

Laremore’s mind-boggling scenario borrows liberally from the long-rumored Navy experiment known as “The Philadelphia Experiment,” as well as the 1980 science fiction film The Final Countdown. However, Laremore manages to nimbly mix Da Vinci Code-style conspiracy, Cold War espionage trickery and bombastic sequences of international warfare to deliver a thriller that performs as well or better than the potboilers it aspires to mimic.