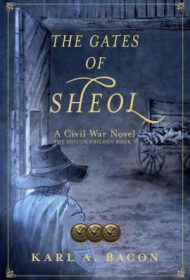 This Christian novel concludes the saga of protagonist Stanley Mitchell as he longs to return from the Civil War to his beloved Anna. (Previous novels in the series are Until Shiloh Comes and Prairie Dog Town.)

Along with thousands of other Union soldiers, “Mitch” is a POW at the notorious Andersonville prison, where filth, thievery, violence and death abound. Permanently lame from a mule’s kick, Mitch stays alive through his strength of character and faith in God, even as his physical strength diminishes. He is a selfless man willing to use his precious resources to help others, and he frequently ponders Bible passages to ease himself through his torment.

The Andersonville of both history and this novel truly evokes Sheol, the Biblical place of the dead. The novel is heavily researched, well written and skillfully paced. There are confrontations between rival prisoner groups, the “Raiders” and the “Regulators” —thieves and those determined to stop them, like Mitch—and escape from prison is nigh impossible. The real story is the mettle of the man and the test of his Christian faith.

Mitch is a well-drawn character, as is Anna, whom readers see mainly through letters. He seems as decent a Christian as one could find, given the circumstances. If there’s an antagonist, it’s less the evil and distant Confederate Captain Wirz than the pestilent hellhole of Andersonville itself.

The excellent story is hampered by some typos (particularly distracting are a few chapters dated 1863 when the rest correctly read 1864, and the use of “it’s” when “its” is required). But these occasional errors don’t detract from one’s overall enjoyment of this solid work of historical fiction. Nor should the strong Christian theme deter a general audience.

Readers will keep turning pages, right up to the satisfying conclusion.

Highly recommended for fans of Civil War fiction, especially those who enjoy a strong Christian theme.

BlueInk Heads-Up: The Star designation is offered with the recognition that copyediting errors remain in need of attention.