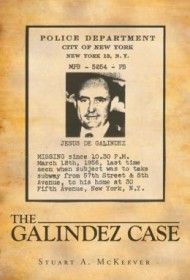 On March 12, 1956, Jesus de Galindez, a Columbia University faculty member, disappeared from his New York City environs, never to be seen again by his academic colleagues, students, friends and family members. Stuart A. McKeever offers an explanation for what happened in his intriguing book, The Galindez Case.

During the 1960s, as a New York City lawyer, McKeever became interested in the case, which resounded around the world. Galindez was part of the Basque separatist movement in his native Spain; was a former resident of the Dominican Republic who had been labeled an enemy of that nation after the ascent of dictator Rafael Trujillo with the backing of the U.S. government; was covertly acting as an FBI informant regarding possible Communist activities in a variety of nations including the Dominican Republic; and had just completed a doctoral dissertation critical of the Trujillo regime.

Nobody ever went to prison because of Galindez’s kidnapping and apparent murder. The private airplane pilot who allegedly participated in the kidnapping and also eventually disappeared never received justice from law enforcement authorities in the U.S., Dominican Republic, or any other nation that might have become implicated in the sordid matter.

McKeever believes he has identified the murderer, the motive behind the murders, and reasons why nobody ever paid for the crime with prison time. His extensive research over five decades has yielded an interesting detective narrative showing the complex nature of the quest for justice across international borders, especially when diplomatic politics interfere.

Unfortunately, the author’s superb research is marred by a few writing flaws: McKeever violates chronology more than necessary, often making his investigation difficult to follow; uses compound-complex sentences that can be unclear; and employs several errors in writing mechanics, including the improper use of commas and semicolons.

Those willing to overlook such shortcomings, however, will find that The Galindez Case is a fascinating account of foul play that caused repercussions internationally.