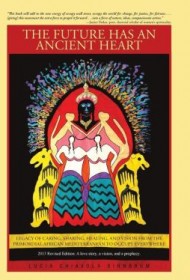 Professor Emerita Lucia Chiavola Birnbaum, PhD, author of many noted works of culture, history and feminism, has revised a book first published in 2012 to include stories of her marriage to Wally Birnbaum, who died that year. She weaves those recollections into the fabric of her larger vision, her belief that all peoples have a prehistoric “dark mother.”

A quotation by activist/artist Carlo Levi, “The future has an ancient heart,” symbolizes Birnbaum’s thesis that prehistoric Europe and Africa were a single landmass inhabited by people who shared racial characteristics, female-dominant cultures and goddess worship. As the continents divided, these black-haired ancients began a worldwide migration. Birnbaum states that her view of female-dominant antiquity “offers an alternative…to the western paradigm of white male supremacy.”

Birnbaum herself traveled widely, particularly to the southern Mediterranean landscape of her family heritage, to explore this thesis. An example of her investigations was a visit to Saintes Maries de la Mere in southern France, where gypsies, “perhaps the quintessential dark others,” revere a black Madonna, possibly a vestige of the worship of Kali, and/or the Hebrew Saint Sara.

Birnbaum’s book is part poignant family memoir, part travelogue, part scintillating explication of her pet academic theories. It is broadly scattered, but pleasant to read, more memoir than scholarly treatise. There are quirks: for example, she capitalizes Africa but not african (and the like), presumably to emphasize that a person is not limited to mere nationality. In addition, she disdainfully designates certain people as those “who consider themselves white.” Some readers may find these oddities appropriate, while others will likely regard them as annoying.

The abiding impression is that Birnbaum has led a remarkable life. Those who admire her work will want to read this latest addition to glean the many gems of her dynamic, inclusive thinking.