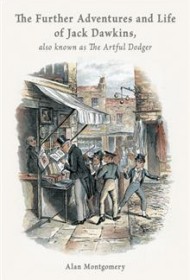 In his debut novel, author Alan Montgomery imagines the life of Jack Dawkins –the character in Dickens’ Oliver Twist who is also known as “the artful dodger” – after he is deported to the U.S. for his crimes as a pickpocket.

The story begins as a frightened Dawkins awaits transfer from his jail cell to the ship, pondering recent tragic events and his fate in America. One might expect dark days ahead for Dawkins, who has been sentenced to a maximum of 15 years of indentured servitude. But when the 15-year-old arrives in Boston, he discovers he is to work for Galting Stone, a kindly widower with a past of his own that also led to his deportation from London.

Stone shares with Dawkins a secret plot, hoping Dawkins’ street skills might be of help. The teen soon settles comfortably into life on the Stone estate, where a number of surprises regarding his family are revealed. But the past is not as far behind as he might like to think and danger looms, until finally, Dawkins ends up in a courtroom.

Montgomery writes well, even provocatively at times, demonstrating a thorough knowledge of Dickens’ characters. The tone, style and language fit the time period, as well. But the plot is weakened by far too many chance encounters with old friends and lost family. Likewise, Montgomery’s efforts to wrap up the story too neatly, and often with a heavy hand toward drama and goodness, can leave the reader feeling manipulated and denied the promise of a good yarn. He also frequently highlights words in bold print, which can be distracting and seems unnecessary.

Nonetheless, the author delivers a tale that moves quickly, with colorful characters, suspense and intrigue. Readers, particularly Dickens’ fans, may find it a pleasant and, at times, captivating escape.