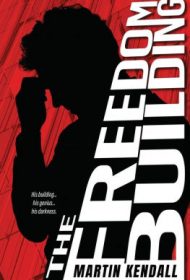 In The Freedom Building, a psychological study by Martin Kendall, 48-year-old mediocre architect John Gowan slowly loses touch with reality after he designs a world-class high-rise.

When the Zenith Star office building Gowan despises is destroyed by a terrorist car bomb, he fantasizes about designing a replacement building. That evening, however, he has a car accident. He wakes up to find it’s three and a half years later, and that he’s in the hospital not because of the accident but because of a fall at the building site of the new, world-class Zenith Star building, dubbed “The Freedom Building,” which Gowan has no memory of designing.

In fact, whenever Gowan looks at the building or original drawings, listens to anything said about the building, or tries to talk about his amnesia, he experiences vertigo and a swirling darkness that threatens to engulf him. Unable to talk about the project, he begins feeling persecuted by employees, his partner, and his client, and they and their surroundings appear increasingly distorted and malevolent. As the story evolves, Gowan moves toward a total break with reality.

While this plot has potential, the story is more plodding than well-paced, and narrative action is jerky: Scenes often change suddenly between paragraphs, leaving readers paging backward to figure out what just happened.

Additionally, numerous, similar scenes of Gowan confronting a “formless darkness,” a “formidable darkness,” and so on, increasingly lose their impact. Description is poor, especially that of ground zero where there is no fire, no dust in the air, no police or rescue workers. The explosion is simply described as “a big bang,” by a bum who sat nearby, unscathed, during the destruction.

Finally, although Gowan believes “the darkness…had always stopped him from achieving his potential,” Kendall never shows any examples of those failures, and the character lacks the full development required to engage readers.

In short, The Freedom Building feels unfinished and will likely leave readers disappointed.