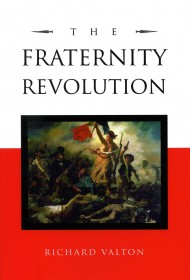 Richard Valton’s title derives from his interpretation of the slogan of the French Revolution: Liberty, Equality, Fraternity. The revolutions of The Enlightenment emphasized Liberty, claims Valton. The socialist revolutions in the late 19th and early 20th centuries were oriented toward Equality. Valton now hails a third movement: the Fraternity Revolution. This movement will promote “a fairer and a happier society where respect for the individual and the environment, non-violence and solidarity will allow the sharing of the world’s tremendous resources…”

The author, who holds an MBA and has long experience in business, analyzes the current economic imbalances between the developed and the developing world. He sees exploitative monetary and trade systems that lead to either tacit or explicit violence in which Western consumers are implicated. Valton examines capitalism’s foundational assumptions: property ownership, competition, and infinite growth. He shows how these assumptions are embedded within a vast system, with negative consequences for the environment and for the animal kingdom, as well as for human beings.

Valton’s vision includes practical suggestions for altering the psychological and social landscape underlying our current socio-economic imbalances. His prescription includes adopting Green policies, mechanisms for transferring wealth from the richer to the poorer countries, and creating a mentoring program to coach the younger generation. Valton rejects the apathy that dismisses even the possibility that such ills as war, poverty, unwanted children, and drug abuse can be cured.

Written in short chapters, Valton’s discussions are perhaps too summary for the complex issues he approaches. However, his arguments are cogent and expressed with moderation, while his prose is lucid if not beautiful.

This small book is a humanitarian vision and evidence of a compassionate and intelligent soul. It’s too quirky to change the world, but it might give some readers a good place to start.