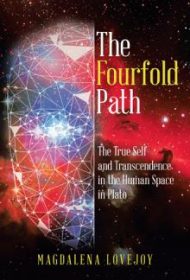 The Fourfold Path by Magdalena Lovejoy is a philosophical treatise on Plato’s theory of the soul packaged as a message for modern readers interested in their own spiritual development. Informed by her personal journey in Hinduism, Lovejoy aims to harness Plato’s classic works to demonstrate how enlightenment, transcendence, and oneness with the divine nature of the universe are attainable when one knows his/her true self.

Although The Fourfold Path is framed as a guide to enlightenment, it is first and foremost a work of historical philosophy. Lovejoy’s exploration and explanation of Plato’s theory of the development of the human soul is painstakingly detailed and researched, and articulately conveyed. Her writing is clear and direct, but her paragraphs are also densely packed with information. While she leans on the kinds of analogies and metaphors designed to invite non-academics into the conversation, the audience seems more likely to be devotees to academic philosophy, such as students and teachers of the subject (very much as if The Fourfold Path were adapted with minimal modification from a doctoral dissertation).

While Lovejoy inaugurates her project with the clear intention of providing a guide to divine enlightenment for spiritual seekers, supported by the views she developed through experience in Balinese Hinduism, there remains a disconnect between her stated goal and the structure and content of most of the book. Apart from the introduction and conclusions bookending her work with context, readers would be forgiven for not knowing The Fourfold Path was intended as guidance for one’s personal spiritual development, rather than an academic treatise on ancient Greek philosophy.

Overall, The Fourfold Path does not fully deliver on its promise to show readers how to attain enlightenment, or how to come to know our god-like selves. On the other hand, for those interested in an a thoughtful and carefully constructed analysis of Plato’s theory of the soul, The Fourfold Path distinguishes itself as a laudable academic achievement.