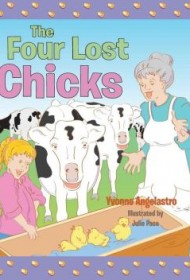 Yvonne Angelastro uses tried-and-true pattern and repetition in her picture book about a grandmother and young girl’s search for the “four lost chicks” of the title.

When the pair discovers that four new chicks are missing, they walk to different areas of the farm, throwing dried corn and using the same call to attract the chicks while visiting different groups of animals and noticing with each, “There’s something that they’re not telling us.”

The author’s approach is well chosen to build reader expectation as each new group of animals is visited. But it’s unfortunate that the call used to attract the chicks is longer, more complex and therefore less memorable than might be wished, a problem that is compounded by its layout on the page from its second to third line, which breaks the flow for the eye and ease of reading:

The reader is also left to wonder if the word “Chi!” should be pronounced as “Chih!” or “Chee!” Spacing is also an issue on page 15, where a two-sentence speech by Grandma is broken up.

In addition, at one point, flying birds are introduced to readers as though the chickens themselves are not also birds. Calling the non-poultry birds “blackbirds” or another specific bird name would help here.

In another unfortunate stroke, the author spoils the surprise of the chicks’ location by using the discovery scene as the cover illustration. Inconsistencies also mar Julie Pace’s otherwise engaging illustrations. The characters’ footwear changes from low shoes to booties that climb to the ankles, and the apple-cheeked grandmother suddenly becomes thin-faced in the final illustration.

With these flaws, unfortunately the overall production comes across as a novice effort. Nevertheless, set in the ever-popular farm location and generally building a sense of expectation about finding the chicks, the book does retain some appeal.