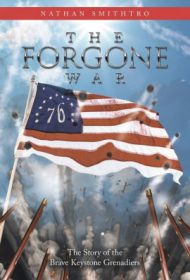 Nathan Smithtro’s The Forgone War concerns the War of 1812, the first challenge to America’s existence as a free nation, as told by soldiers who struggled through the grisly conflict.

The historical novel follows fictional Major Simon Smithtrovich as he leads his Seventy-Sixth Pennsylvania, an elite force of grenadiers, through such important battles as the burning of Washington, the tide-turning defense of Baltimore and the devastating defeat of the British at New Orleans. Smithtrovich, who created a superb fighting unit with four close friends as war clouds were forming, is an ideal commanding officer: disciplined, smart, compassionate, fair, and dedicated to his troops’ welfare.

The author admirably introduces Americans to one of the most ignored yet important wars in the nation’s history. Still, the book suffers from several flaws. There’s a hefty dose of gore as enemy soldiers fire muskets, rifles and artillery point blank at each other: arms are cleaved, eyes gouged, heads decapitated, and so on. Indeed, war is bloody. But sometimes, the descriptions of body parts blown asunder feel clinical rather than visceral. Additionally, the narrative focuses on individual heroics and terror, rather than delivering a broader scope. Readers might wish for more context regarding the war’s causes and consequences.

Suspension of disbelief is required when readers learn that women are among Smithtrovich’s best fighters. The lack of historical evidence of frontline women fighters in the war and romantic scenes amidst the bloodletting evoke skepticism.

Stylistically, the narrative lacks the elegance and polish of a master storyteller like Michael Shaara. The battle scenes sometimes read like a recitation of the manual of arms: “about face,” “column right” and “hut one two.” And the dialogue can be stilted for such life and death struggles. Asks a dying foot soldier, with odd formality, “Can you sing me a tune, sir?”

Such flaws will likely deter general readers looking for an immersive experience. Fans of military history, however, may find elements of interest here.