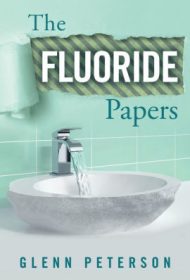 In this tale by author Glenn Peterson, two New York City journalists seek the truth behind two murders, as well as a public health program some believe may be toxic.

As the story begins, guilt-ridden widow Frieda Underwood has reached out to reporter Suzanne McAllister. The widow revealed that decades prior, her deceased husband, who made his fortune marketing the first toothpaste to contain fluoride, poisoned a man; his actions were repeated years later by her son, who murdered another man. Readers learn that both victims were vocal opponents of the use of fluoride in the water. McAllister drafts colleague Cooper Hayes to help learn the truth, and they soon begin to follow the trail.

The hunt leads them to various old documents and public health meeting minutes, classrooms, and private dwellings they access illegally. As they travel, Hayes shares his political thoughts with McAllister, including his beliefs that Obama is destroying the country and that climate change is fake news.

The story is professionally written, and the author largely keeps the plot moving with the protagonists’ efforts to outwit the bad guys.

Unfortunately, the narrative is hampered by the inclusion of extensive scientific information about fluoride and its suspected impacts on health and the politics surrounding it—including Gerald Ford’s early efforts to sell it to the public. While important to the story, the barrage of information, delivered through textbook-like charts and graphs, lengthy quotes in chapter beginnings and long conversations, quickly becomes tedious.

The narrative is also undermined by Hayes’ political views and conspiracy theories, detailed at length, which interrupt the flow of the story and will be off-putting to many readers. Much of the story reads like info dumps advancing the author’s personal agendas, rather than an organic evolution of events.

Because of such issues, the book is unlikely to attract a wide readership, although it may appeal to those who share the protagonist’s conspiracy theories.