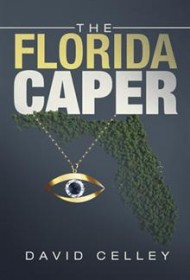 The story opens as a cat burglar targets Charles Stanford, a wealthy retired industrialist living in Florida. The burglar steals a rare piece of jewelry called “The Eye of the Sun,” which is rumored to contain fragments of the famed Hope Diamond. Rather than calling the police, the elderly tycoon enlists the help of his nephew Greg, a history professor who largely serves as an exposition delivery device. (When Stanford says of the lost jewel,  “How’d you like to go find it for me?”,  Greg answers, “You mean you want me to go find the Eye of the Sun, wherever it might be, and bring it back to you?”)

Greg sets up shop in Palm Beach, Florida, where he hires two private eyes. Tina Burleson is the more insightful investigator while her partner Mike Cheatham is rougher around the edges. Together, the trio tracks down a low-life named Rico Olivetti, who knows his way around fenced goods.

From here, the story becomes unpredictably complex with too many subplots in play. The bauble in question ends up in the hands of Ramon Rivera, a dangerous drug dealer who rules from a compound in the Bahamas.

The story features some intriguing aspects, including a deep dive into the real-life history of the Hope Diamond and a taut mission to steal the jewels back from Rivera. However, the novel is overly reliant on exposition, with numerous uninspired scenes where various members of the cast are just sitting around in a bar talking. The two detectives are well-drawn, but Greg remains a cipher and Rivera makes for a profane but cartoonish villain.