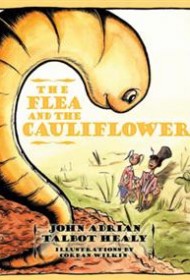 John Adrian and Talbot Healy’s middle-reader novel follows the picaresque adventures of an intrepid flea named Fergus, who spends his formative years living comfortably on a large dog. Fergus’ carefree existence comes to an end during a rainstorm, which washes him off his host and away from his friends. Fergus then finds himself stranded on a cauliflower, where, after some perilous adventures, he finds another flea colony to join. Among his new compatriots is a winning female flea named Maddy, whom Fergus marries after fighting a rival for her hand.

When a marauding cow destroys Fergus, Maddy and their children’s cauliflower home, a friendly worm helps the flea family plant a new cauliflower seed, but their attempts to land on the grown cauliflower end in disaster. Finally, when all seems lost, Fergus finds another, quite familiar home — back on the dog on which he grew up.

The Flea and the Cauliflower will appeal to fans of quirky animal stories who have outgrown picture books but are not quite ready for longer books like The Wind in the Willows. Healy’s whimsical narrative is action-packed, but his tone is gentle enough not to disturb sensitive readers. Though the writing style could sometimes be smoother and the book could use a more thorough copy edit, the story should entertain, whether read aloud or silently. Young readers are likely to enjoy guessing where the twisty story is going.

Corban Wilkin’s spirited, vibrantly colored illustrations (one per chapter) are an immense asset to the book. They perfectly capture the cheery, fanciful spirit of Adrian and Healy’s text.