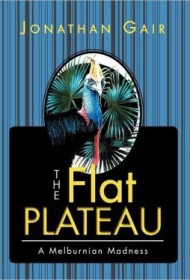 Strange occurrences in Australia’s Far North Queensland are at the root of this multifaceted sardonic novel, which mixes a business executive on holiday with politics, love interests, deceit, and the persistent paparazzi.

As the book opens, Hugh Amberbottom, 28, the corporate chair of a thriving business, has just returned from holiday at his father’s cattle ranch in warmer climes north of his home in Melbourne, Victoria. Through probing questions from local paparazzi, the book hints at murders that occurred during his visit on the Flat Plateau that have caused a significant change in Hugh.

The balance of the book goes back to the oddities of that trip, including dead bodies turning up, Hugh stalked by a mysterious presence he calls the “Thing,” and his encounters with a cow and blind hippie. Hugh also is puzzled when so many women he sees look like his fiancé, Louise, who is fighting her own battles with her alter ego Gabrielle. The story ends with some surprise twists.

While The Flat Plateau displays an appealing quirkiness, the characters, aside from Hugh, are not fully drawn. The plot bobs and weaves in confusing ways, with situations that sometimes seem pointless.

The book’s biggest flaw is jarring sentence structure with random punctuation that make entire paragraphs difficult to follow. That’s a pity, because many lines contain nice poetic imagery and metaphors. In describing a giant tree crashing into a canopy of smaller trees, the author displays both the strength of his vision and the weakness of the grammatical execution: “So it is that more or less together they all swayed, but when a more powerful blast changed the creaking song first to that not unlike double bass or piano strings breaking then to something more similar to fireworks or a pop-up target, rifle club shoot.”

This novel has many good elements, yet most readers will get lost amid the clutter of fragmented sentences, giving up long before the story ends.