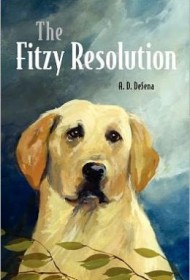 In A.D. DeSena’s modern fable, Yorkie dogs are vanishing without a trace. This is a job for … the Central Canine Government. In the dog democracy imagined here, the political structure is the key to maintaining order, and Senator Casey, a Yellow Labrador, is on the case.

In the tradition of classic animal stories such as Richard Adams’ Watership Down and George Orwell’s Animal Farm, DeSena tells his story from the animals’ point of view. The canine world in The Fitzy Resolution is fully imagined, with its own rituals and a unique vocabulary. Senator Casey and her faithful friends communicate through “scentimas,” a complex layering of smells that conveys messages throughout the neighborhood. They believe in “carambee,” or brotherhood among all canines, and are deeply suspicious of “wanyama,” domesticated animals, like cats, who live entirely independent lives. They are even more nervous about undomesticated animals from The Wilds, such as the “fananas,” or wolves, who they suspect of playing a part in the Yorkies’ mysterious disappearance.

The dogs convene endless meetings and pass countless resolutions in pursuit of the truth, and DeSena makes their dialogue all-too-believable, successfully replicating the banality of human bureaucracy and miring the mystery in red tape. It’s sort of like watching C-SPAN with beagles, poodles, and dachshunds scurrying around Congress. You can follow the action if you concentrate, but you’re more likely to change the channel.

A variety of characters come along to break up the political posturing, and dedicated readers will be rewarded by humorous interludes with the squirrel-run media, the bulldog police force, and an unlikely group of historians composed of Norway rats. High-tension confrontations, including some violent fight scenes, also punctuate the lengthy explanations of canine legal proceedings.

Casey and her canine cousins shed some light on the flaws in our own human society, but The Fitzy Resolution’s many mundane passages will require perseverance on the part of readers.