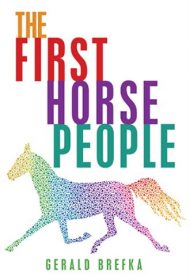 With The First Horse People, Gerald Brefka offers a fictionalized account of the origins of several horse tribes approximately located in the steppes of East Asia.

The book appears to take place in the last centuries of the pre-Christian period and the first century of the post-Christian period. Brefka’s account begins with the first horse people, the Botai, and then spends much of the book imagining the origins and interactions of two of the most powerful horse tribes located in this region: the Sarmatians and their enemies, the Scythians.

As the novel progresses, Brefka also describes the tribes’ interactions with the Persians, the Greeks and the Romans.

The book’s most intriguing accounts stem from these interactions. For example, Brefka posits that the mythical Amazonians were daughters of the Sarmatians, introducing the Amazons after Sarmatian maidens are captured by the Greeks. In the world of the novel, the Sarmatians are also tasked with guarding Hadrian’s wall, eventually becoming prototypes for characters of Arthurian legend.

Brefka’s characterizations, however, fall flat. He refers to many characters in the work as “chief” or “granduncle.” Because no character is fully developed, the reader will become confused about who the author is referring to, particularly when two “chiefs” are interacting. Additionally, much of the narrative is expository, explaining what is happening rather than showing it in vivid scenes.

The work is also rife with a wide variety of technical errors, leading to an extreme lack of clarity. For example, Brefka writes, “No one realize [sic] that with so little room in the fallen trees and with babies, the mother horses can’t really try from being ridden.”

Given its compelling subject matter, The First Horse People could be a remarkably interesting historical novel. Much editorial work is needed, however, before it will be accessible to a general audience.