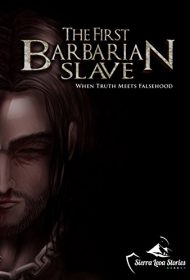 The first book in a historical fantasy series and prequel to a video game, The First Barbarian Slave follows the journey of a man from slave to King.

Rofurmer is a 13th generation barbarian slave and the last prince of the Makenne, who have served the Golden Race since their defeat in the Four Moons War centuries before. They perform manual labour and are abused by their captors, even denied their own religious books.

When a prophesised sign appears in the stars saying that the Makenne will be free again, Rofurmer leads his people in a rebellion to gain their freedom and reclaim their stolen land. But the Golden Race are unwilling to give up the land or their slaves and ally themselves with the demons of the underworld.

The book’s main strength is its evocative setting and world building, combining elements of Greek and Egyptian mythology, religious ideology, and a unique underworld society—all  detailed in clean, uncomplicated prose. While readers will root for the slaves, the characters remain in a moral gray area, adding depth to their personalities. Rofurmer, particularly, is seen struggling with his religious beliefs, rejecting the gods of his enslavers and adapting to new ways, making for an intriguing character arc.

Unfortunately, this fascinating setting and otherwise interesting character development is overshadowed by the heavy-handed religious message. Rather than left to readers’ interpretation, it’s spelled out by regular author’s footnotes, such as, “The one who denies God is like the one who says he has no parents. For if you did not have any parents, then how were you born?” These are both pretentious and distracting. Even in the narrative, some major emotional moments, such as the death of Rofurmer’s fiancée, are glossed over to make way for lengthy monologues.

Fantasy readers or fans of revolution stories who can ignore the footnotes and don’t mind the religious overtones may enjoy this novel. Others will likely find it a challenging read.