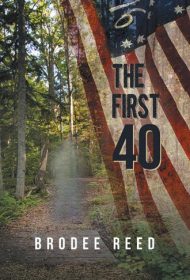 In The First 40, author Brodee Reed touches on addiction, PTSD, and other issues while walking readers through his “first 40” years of life.

In spirited prose that occasionally addresses readers directly, Reed describes growing up in on and off base housing in a military family. He then writes about his own decision to join the Army after spending much of his youth drunk and high. Marriage, the birth of a son, divorce, and deployments keep him busy. Meanwhile, he drinks to escape. A stint in rehab seems to give him a needed reset, and a second marriage offers a fresh start.

Reed’s life presents an opportunity for mining rich territory, as the elements of addictions are ever-intriguing. But he makes some odd choices in his narrative. Reed reprints a speech on patriotism he admires by Ronald Reagan in its entirety, and writes at length about which movies and TV shows were popular in whatever year he’s discussing. The frequent use of initials instead of names leads to sentences like this: “Back at U9, our friend F2 returned from leave, [sic] he ended up marrying LLF from Nuremberg on his two-weeks leave, [sic] we were all happy for them.” It’s hard to care about people who are barely described and nameless.

Some misused words, improper punctuation, and military jargon also slow things down, as do jumbled or incomplete sentences such as: “My favorite memory was when we were all doing a land navigation course and my team which consisted of two other guys one named Private Bubba, and the other Private Calli.”

That said, Reed has a warm, kind personality on the page. It’s easy to like him and root for him, and his deployment stories give a warts-and-all look at military life.

Were he to revise his story with an eye to more thorough editing and greater reflection on the connections between addiction, military service, and PTSD, his narrative could be a winner.