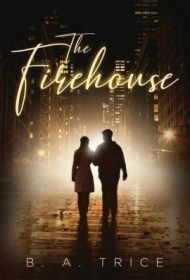 In B.A. Trice’s novel The Firehouse, the two main characters seem to have the ideal relationship, sharing a business, an apartment, even vacations — everything but romance.

The duo meet when Margaret is managing the Oyster Bar in Grand Central Station. When she opens a new restaurant, the Firehouse, and finds herself nearly overwhelmed by its success, she invites Rich to join her as a business partner. Not long after, he also accepts her invitation to share her apartment above the restaurant. It seems there isn’t anything they don’t do together — she even shaves him in the shower when a modeling job requires it — except have sex. They obviously adore each other, but Rich is still in love with Sandy, the wife who packed up and left with no word several years ago. He’s never been able to learn what became of her, but he still wears his wedding band.

It’s clear Margaret wants more, but it’s only after her siblings divulge to Rich her deep feelings that he realizes he must make a decision. Then comes a troubling call from his in-laws to complicate matters.

This is a character-driven tale that, while short on plot, is satisfying in the details of Margaret’s and Rich’s lives and in descriptions of the New York area, particularly the historic buildings and quirky old design elements, such as the loose brick floor of the Firehouse — once an actual firehouse.

Early on, there’s a great deal of narrative where additional scenes might have made for a stronger story. There is nothing, for example, to show why Rich is so in love with Sandy. Other scenes throughout don’t seem to serve much purpose, such as when Rich digs giant holes at the beach. The story also mistakenly calls the main character “Rick” from time to time.

These faults aside, The Firehouse is a largely rewarding tale that would appeal to someone looking for a light story populated with bright, interesting people.