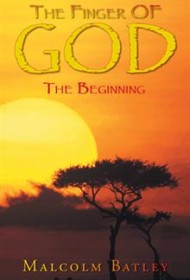 In The Finger of God, Malcolm Batley writes about the harrowing experiences of a 17-year-old, working-class boy. The boy’s name: Malcolm Batley. Despite having the same name as the author, the character and story is clearly fiction.

Young Malcolm is kidnapped on the streets of London and taken to Africa via France to be sold into slavery. The story details his efforts to escape. Batley portrays the youth as a feisty ne’er-do-well who’s forced to draw from an untapped inner strength and intelligence he never knew he possessed. Although it demands a healthy dose of suspended disbelief, the narrative has some power as a mystery, adventure tale, love story and implied commentary on child slavery.

Unfortunately, however, these elements are diminished by numerous typos, grammatical errors and inconsistencies. For example, the first page describes Malcolm as “just over five feet tall,” while on the back cover he’s a foot shorter. Characters’ names often change: One goes from Lopez to Lopes then back to Lopez within a matter of pages. Additionally, throughout the story, the author arbitrarily switches from omniscient narrator to first person voice, even within the same sentence (“… we all cried themselves to sleep”).

Batley vividly describes the sadistic kidnappers and all those associated with moving Malcolm, and three other children, from one continent to another. The children are drugged, locked up in dreadful conditions and tormented by their captors. Illness, murder, multiple near-death experiences and escape all figure into Batley’s account, as do jungle creatures, the mafia and revenge. It’s an exhausting vortex of emotion and intrigue with a few references to black magic thrown in but never clarified.

Ultimately, the issues mentioned make this a challenging read with a story that’s difficult to absorb. The novel requires significant revision in order to find an eager audience.