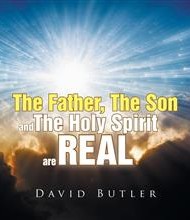 David Butler’s book is his testimony of drug addiction and despair—and his ultimate redemption through the Holy Spirit. He wrote The Father, the Son and the Holy Spirit Are REAL to provide hope to others.

The book opens with Butler’s completion of rehab and probation after being arrested on drug charges in Arizona in 2005. Then, in 2006, Butler worked at a night club for about a year. During that time, he became depressed, relapsed, and decided to commit suicide in the future: “My plan was that in 2011 … I was going to walk into the Gulf never to be seen again.”

But God had a different path for Butler. During a 2010 Christmas eve mass with his family in Iowa, the Holy Spirit spoke to him, echoing the priest’s words: “Accept God’s forgiveness for your sins and become a beacon of hope for others.” Butler also had a vision of supernatural light during the service, a vision that changed his life.

Butler’s personal story is a moving one. But at times, the narrative’s details are hard to connect. For example, at one point, Butler is on parole in Arizona. The next chapter mentions that he was teaching school in Texas prior to his arrest. Another passage implies that he was arrested for leaving school in 2005 to buy drugs. These scattered details leave readers with questions. For example: Did he walk out on his teaching responsibilities to buy drugs? And how do his actions in Texas relate, if at all, to his arrest in Arizona? More elaboration and better transitions would help readers tremendously.

Readers who are struggling (or have family members struggling) with drug addiction or suicide ideation may find encouragement in Butler’s account. Many, however, will feel frustrated by the narrative’s writing issues.