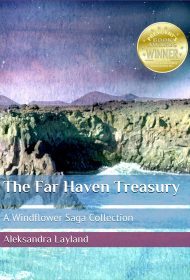 This omnibus edition, which includes the last novel of the Windflower trilogy, as well as three related novellas, wraps up Aleksandra Layland’s richly described saga chronicling multiple generations of members of the Ansgar royal family.

A seamless blend of fantasy and romance, the stories featured in this collection take place in a more modern era than the two previous treasuries. The various kingdoms now have steamships, handguns, and electricity and are entering an early industrial age.

The superb novel, titled Far Haven: A Quest for Certitude. A Fight for Justice, revolves around Loris Kennet, a 29-year old tribune in the elite Royal Winged Cavalry of Pomerania who, after being drugged by slavers and framed, is stripped of his rank and banished. His father, however, collects on an old debt and alters his son’s fate; instead of being exiled on a small uninhabitable island (essentially a death sentence), Loris agrees to marry a widow who lives in the Wastelands of southern Kimbria. The widow, as it turns out, is Keridwen Ulani of Ansgar, whose brother is the king of Kimbria. Forced together by circumstance, Keridwen helps Loris deal with a nightmarish past—and eventually plays a part in Loris’ heroic tale of redemption.

The two novellas that follow—Albina and Courage of Ansgar—are both solidly self-contained stories and intimately connected to Far Haven, revolving around characters in the novel (Albina, the only daughter of Keridwen and Loris; and Kerys of Ansgar, a student who becomes consort for the new king). But the last novella, a portion of Swords of Ansgar, doesn’t fit well, either tonally or narratively. The main character isn’t connected to the Far Haven arc and the storyline takes place in the far future.

That said, the novel and two novellas are utterly compelling, powered by adeptly developed characters and an emotional authenticity that will resonate with fans of romantic fantasy. This treasury—and the entire saga—provides a wealth of reading entertainment.