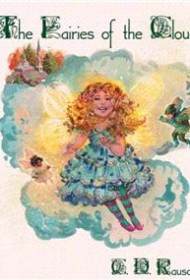 C.D. Rauscher’s new chapter book follows the adventures of Pixie, a young fairy who has a decision to make as she finds herself growing attached to a human family. While playing in her homeland above the human world, Pixie falls through a hole in the clouds and tears one of her wings. Unable to fly back home, Pixie is rescued by a group of human siblings, whose mother repairs her wing.

After returning to the clouds, Pixie misses her human companions and revisits Earth frequently to see them. But traveling between worlds begins to diminish Pixie’s fairy magic. The Cloud Master, who rules the fairy world, summons Pixie and tells her a momentous secret: Pixie’s father was a human, her mother a fairy who chose to stay in the human world. Pixie decides to follow in her mother’s footsteps and joins her adopted human family. Many adventures follow for Pixie: the illness of one of her adopted sisters, the discovery of her real father and the experience of falling in love.

Fairies are such a popular theme in children’s literature that The Fairies of the Clouds has a great deal of strong competition. Rauscher’s underlying concept — a young fairy trying to adjust to the human world — is appealing, but the story branches out in too many directions over too few pages. The subplots, which include a mute child who begins to speak and the disappearance of a large quantity of Pixie’s magic dust, come so quickly that they fail to make much of an impression. Robert Sauber’s illustrations vary in quality: some are enchanting, reminiscent of those in old-fashioned children’s books, while others look rough and hastily executed.

In sum, the choppy plot is likely to frustrate young readers, outweighing its conceptual potential.